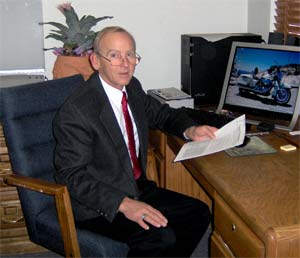 Dr. Andrew K. Hall received the 2nd Class IV laser in the western US. He spent several years credentialing other doctors for the use of Class IV lasers while managing a busy chiropractic practice. With his 3 hour PowerPoint program he has taught Principles and Practice of Therapeutic Lasers at continuing education classes for Chiropractors. He has authored a treatment manual. The California Chiropractic State Board recognizes him as an expert in Laser Therapy and had Dr. Hall write the safety protocol for all Chiropractors in California. Dr. Hall has treated patients with laser therapy for 14 years and has attracted patients from 6 states for treatment. He has attended countless Laser conferences throughout the US and in Florence, Italy.

A horrible uncontrollable cough and difficulty breathing prompted a trip to the Pulmonologist. I was diagnosed with IPF in October of 2014. My Pulmonologist seems to think 40 years exposure to X-ray developing chemicals caused the IPF and felt that I had probably about 5 years to live. I began laser therapy on myself in my office, thinking ‘what have I got to lose’, either it will help or it won’t.

Amazingly, a subsequent Pulmonary Function Test (PFT) showed much improvement. The Pulmonologist said he was shocked as this disease ‘never improves’. Later, I had another CT scan that showed no additional ‘honey combing’ in the lungs. Another PFT was performed and again, more improvement. Blood Oxygen levels were stable at 97-99. 3 more PFT’s were performed and they all improved again except one that showed no change. Another round of CT scans and PFT were performed in October 2017, CT scan shows still no more new honey combing. More improvement with the PFT showing more improvement with the Vital Capacity. Blood Oxygen levels continue at 97-99. The Pulmonologist continues to be amazed.

I am going on my 4th year after my diagnosis and am thrilled with my progress. I run a busy practice and yet take weekly 3-5 mile hikes and am extremely active. I cough less and less. I feel good and have the stamina of most other 65-year-old men. I have hope that I didn’t have when I was first diagnosed.

I told my story of laser success on EarthClinic.com and began having people with IPF contact me. We found them a doctor with a Class IV therapeutic laser and they began treatment. ALL patients have improved with the use of a laser.

What needs to be done now is a study involving lots of IPF patients to confirm and measure the efficacy of therapeutic laser in IPF treatment. I feel a moral and ethical responsibility to pass on this information, learn more, and help people with this dreadful disease. The only way we can do this is to get more people with IPF to get treated with a therapeutic laser and keep track of progress. So far, the anecdotal evidence shows improvement for all patients with the laser. We will help you locate a doctor with a Class IV laser if you choose to utilize this amazing discovery for yourself.

This website will address general information regarding IPF. We are dedicated to helping those with IPF to improve, prolong their lives and provide hope.